Diagnostic radiology procedures have become a major target of Medicare reimbursement cuts.  The impression is that these expensive tests are a chief contributor to the rising cost of healthcare. However, imaging costs vary according to where they are performed.

To understand where the imaging costs were the highest and how best to improve cost savings without limiting access to tests, researchers undertook an evaluation of Medicare Part B data to assess which tests were being performed, by whom, and in what settings.

Diagnostic Imaging spoke with David C. Levin, MD, professor and chairman emeritus of the Department of Radiology at Thomas Jefferson University Hospital and Jefferson Medical College. Levin coauthored the study that was published in the Journal of the American College of Radiology.

Why were you interested in looking at the imaging costs relative to their location?

You have four primary locations [inpatient, outpatients, emergency departments, and doctors’ offices] where imaging is done, and I think it’s very important to see what the trend is in inpatient imaging. Is the trend going up, going down or staying the same?

The patients who are in the hospital are sicker now than they used to be, so we wondered if imaging rates would go up in conjunction with the increase in acuity. And, it doesn’t look like they are. An increase in imaging use along with acuity did exist for a while, up to about 2006. But from 2006 to 2011, it didn’t really change much. It actually went down slightly.

So then, what about outpatient imaging? How much of that is being done in private offices versus in hospitals? The importance of this is that work done in hospital settings on outpatients tends to be quite a bit more expensive to the payer, to Medicare, than when work is done in a private office. The reimbursements are higher to hospitals than private offices. This is important.

In terms of emergency departments, you hear that ED doctors are so overworked that they may not take time to evaluate the patients but instead immediately send them for an imaging test. So it’s important to see what is happening there as well. The finding in this particular study seemed to bear this out: that more imaging tests were being ordered. The relative value unit [RVU] rate in EDs is the only one of the four locales that showed a consistent increase.

So, there are several different aspects of this study that I think were interesting. 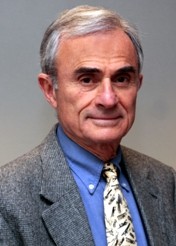 You saw significant differences in cost where the studies were performed. What’s the takeaway?

One thing doctors could take away from our study is that there is still room for private office radiology to expand. As I said before, the payers —  Medicare and the others — are realizing now that if too much imaging work migrates into hospital outpatient departments, this is going to cost a lot of money. So I think that there’s still an opportunity for radiologists to go out and open private imaging facilities on their own.

You mentioned that the imaging rate in the hospitals did not go up despite patient acuity. Why do you think this is so?

I think that up until 2006, there was a steady increase in utilization of imaging. In fact, in Iglehart’s article [in a 2009 New England Journal of Medicine], one of the references we have in the paper and which was very widely read, showed that in the early years of the last decade, imaging was the most rapidly growing of all physician services in this country. That really drew the spotlight of the payers and the policy makers to imaging. They all said, “Imaging is growing so rapidly, we’ve got to do something about it.”

In the subsequent years, the growth in imaging basically stopped. And in the more recent of the years, 2010, 2011, it actually began to contract. We’ve shown this in some of the other work that we’ve done. The utilization rate of MRI in the Medicare population has actually begun to drop. It’s the same thing with CT. There’s also been a sharp drop in myocardial perfusion imaging, the nuclear cardiac test.

I think all of this is due to a variety of different factors. I think probably the major factor is the RBMs, which have basically changed the way to thinking of all doctors in this country who order imaging.

The doctors now understand that they have to justify what they are doing and that someone is looking over their shoulder. Doctors around the country have begun to think twice before ordering high tech imaging because they know it’s going to be questioned. They also now have to jump through hoops to get these studies done. They have to submit a request; they have to indicate what the clinical circumstances are. It’s basically a barrier, not a huge barrier but nevertheless, a barrier to ordering high tech imaging.

So I think the RBMs have had the major impact. There are other things, such as concerns about radiation. There are, I think, also a lot of doctors who have become concerned about the rapid growth in costs of medical care, so they are beginning to look a bit more carefully at the various tests they order.

The recession might have had something to do with it too. Patients have lost jobs. Even for patients who still have jobs and still have insurance, the co-pays have gotten higher and I think that’s a problem for a lot of patients. And there’s the advent of the high deductible insurance policies. There are now many people who have these policies that require them to meet a deductible of three or five thousand dollars before their insurance kicks in. So they’re really on the hook for paying for high tech procedures up to the point when they’ve reached that deductible.

Now that you’ve done and published this study, what comes next?

That’s a good question. I don’t know. We’ll see what happens. It will be interesting to see if these trends continue. I think it’s going to be very important to see what happens to imaging over the next five years. My hunch is that rates are going to go down. The use of them is going to drop because as accountable care organizations come into vogue, they’re going to be very anxious to reduce their costs of medical care. They’re going to take a very hard look at the use of imaging. So I wouldn’t be surprised to see the use of imaging drop still further.

Will you repeat the study?

I think so. We’ve done a number of other studies that looked at imaging utilization, looking at utilizations of different modalities. Here in this particular paper, we didn’t look at individual modalities, just overall rates, by location or place of service. But we also are doing work on the trends on use of imaging by different modality. We’re going to keep looking.

We have to convince the policy makers that if they want to look at reducing the costs of healthcare, they should look at the areas that are still growing. Imaging is no longer growing. Imaging has been cut pretty substantially in terms of the reimbursements but maybe they should turn their attention elsewhere. One of the places where they could turn their attention would be self-referred imaging.